Here is a story of a Top Sportsman car I bought off RacingJunk. A must read for people who know Keith Haney and John Woods.

I was in the market for a new drag car and found, as advertised, a "new" 2011 Pontiac GXP built by Stroupe Race Cars, but sold by John Woods. So I bought the car. It arrived, and looked good until I did some thorough inspecting of the underside. What I found was a floorboard that was buckled and repaired, a seat valley that was bucked and repaired, and powder coating that was sanded off, and spray painted on various tubing. I just couldn't believe that this was sold to me as a "new" car. I took over 300 photos, and emailed most of them back to John Woods. Next thing, I got both a phone call and an email from Keith Haney who gave me a story of the car falling off a fork lift during its build, and will take care of me through Stroupe Race Cars and build me a new car. I never dealt with or heard from John Woods again, it was all Keith Haney from that point on.

Skipping ahead to the end of the new car build, approx 9 months later, I received a phone call from someone in Oklahoma that said they found my contact info on a box inside a "new" race car they bought from John Woods, and wanted to know what my connection was. I told them the story, and they also told me a story of them buying what was thought to be a "new" race car that had never been driven. They found more damage on the car that I was not aware of, and shared the below videos with me. They told me that this "new" car that John Woods and Keith Haney had been selling was the same one that Keith Haney crashed, and caught on fire. Unbelievable! After some verbiage back and forth and threats towards Stroupe Race Cars, the second party from Oklahoma got their money back. I guess I lucked out by getting a new car. Well, Be Aware, The damaged car is back up for sale on John Woods' website. Hope they learned their lesson and sell the car as a "damaged" car, and not a "new" car.

The end result is that Wally Stroupe of Stroupe Race Cars has worked with me, and I finally have a great race car. Wally was never at fault in all this, and definitely needs his name cleared from all the wrong doings of John Woods and Keith Haney. 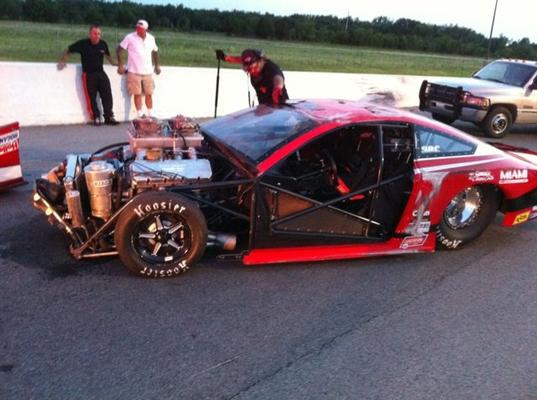